Generating media with deep learning is a dual-edge sword with both interesting and scary implications (e.g. deepfakes). However, one of the more uplifting domains is music generation. In this tutorial, you'll learn how to generate CoreML model that generates a rhythm sequence of MIDI notes.

Creating this kind of models doesn't fall under any of the task oriented models provided by either CreateML or TuriCreate, so you'll have to create and train the model using Keras, and then use a coremltools converter to convert the model into CoreML.

This tutorial was inspired by the Matthijs Hollemans' tutorial where he wrote an LSTM in Swift using the Accelerate framework. Its a very good tutorial, and many of the explanations won't be repeated here. Many tutorials have covered the topic of MIDI note generation before, however, one of the interesting approaches used by Matthijs in his tutorial is, he accounts for timing information during training.

Where Matthijs creates his model using tensorflow APIs, and implements his LSTM directly in Swift using the Accelerate framework, this tutorial will focus on creating a model using Keras, and then converting the model using coremltools.

In this tutorial, you'll learn how to

This tutorial makes use Google Colab, however, feel free to use whatever development environment you wish. You can always look at the completed notebook here

The dataset you'll be using comes from groovemonkee.com. The dataset is freely available, However, groovemonkee requires sign-in credentials to get them. You're free to use your own dataset if you have a library of MIDI files, however, there are some inherent things built into the groovemonkee dataset that you'll leverage in this tutorial.

In order to prepare the data for training, Matthijs' processes the MIDI files directly working with the bytes of the file. Unfortunately, this didn't work with the dataset from groovemonkee because the MIDI type was unsupported by his script. In this tutorial, you will instead make use of the MIDO python library for working with MIDI.

The entire script for processing the MIDI files can be found in the notebook, however, the core calls to MIDO in order to read MIDI files are as follows:

In the above code, you iterate over a list of file paths to all the midi files. In the analyze_midi_files method, you'll iterate over all the files and collect some basic information from the data. Here's a dump of what that method prints:

You can see that the dataset consists of nearly 600 tracks. Most of the tracks contain 240 ticks_per_beat. There's a wide variety of tempos found in each file, however a large majority seem to fall into the the '4/4' time signature. In this tutorial. you'll only work with files that have a tempo of 500000 microseconds (which is 120 beats per minute) with 240 ticks per beat. The filter_files method filters the original files down to match those parameters. Here's a sanity check on the dataset:

Now that the dataset has been curated, it'll make working with it a lot easier. In the original blog post, the author combines all the tracks into one mega track, and then generates a matrix where each row is a one-hot encoded vector containing both the notes and tick information. You can see the same approach taken in the create_mega_track method in the notebook. In the notebook, you will see that you are generating 10 different "mega tracks", and then one hot encoding them in the generate_one_hot_encoding method. Here's an example of a single row of what the processed dataset will look like

Essentially, since you analyzed all the MIDI files, you found that there are a total of 15 unique notes, and 147 unique ticks. This means, since the number of each feature is finite, you can safely one-hot encode each, and concatenate them into one large array. The array will effectively be all zeros, except for 2 entries which will be 1. This means that you'll generate a full dataset that will consist of N number of notes, some defined number of time steps T, and (15 + 147 = 162) features.

Note: Your results for the number of notes and ticks may differ because the script randomly shuffles the MIDI files before generating one large file before one hot encoding.

In order to feed the data into your Keras model (something you'll do in the next section), you'll wrap the data into a Keras sequence generator. Essentially, you're leveraging the on_epoch_end method to return the data from one of the mega tracks you created:

With the data processed, you'll now turn your focus to creating the Keras model.

With the data ready to go, you can start working on the model to generate some MIDI notes. In this tutorial, you'll create a fairly simple model with a single Bidirectional-LSTM and a single Dense layer. However, since you're trying to output both the timing and the notes using one-hot encoding, it's the output layer, and the loss function that are far more interesting problems to solve.

The first question you should ask yourself is, what activation should your model use? Recall, we're expecting a single array where two indices have the highest probability, i.e. this is a little like a classification problem with two independent classes. One way to solve this is to use a custom activation layer. Add the following code to an empty cell

For the most part, this is standard code for creating a model. The notes and ticks variables hold the number of unique notes and ticks you found in the previous section. The standout code here is the addingtion of a Lambda layer using a custom activation method. Briefly, this is how things break down:

The other curious layer, if you've never come across it, is the TimeDistributed layer. Essentially, this layer allows us to generate an output for each sample provided. CoreML generally ignores this layer because in CoreML, there's always a sequence or "temporal" slice.

You might be wondering how coremltools deals with Lambda layers. You'll go over that in a later section.

Note that this technique of splitting the arrays to get at the notes and ticks separately is a recurring theme in this tutorial. In fact, with this custom activation out of the way, it's time to think about the loss function

How do you Compute Loss?

In theory, you could use any loss function to train your model, however, there might be a better approach. Since the output of the model is essentially two classification results, you can perform cross-entropy loss by first splitting the output of the array. Keras also allows you to pass in a custom loss function during the compile step.

When you compile your model, you should get an output that looks as follows:

With the model ready to go, the next logical step is to train it, which you'll do in the next section.

Now that you have your model ready, it's simply a matter of training it. Using the data generated earlier, invoke fit_generator on your model, and allow it to finish training.

Your results may vary, however, typical results from training may looks as follows;

Converting the Keras Model to CoreML

Converting the model to CoreML is pretty straight forward. You'll start with installing the coremltools package.

Once its been installed, you'll make use of the general keras.convert to convert the model. The one caveat here is the Lambda layer. Since this is a custom layer, coremltools won't know how to convert the layer. Add the following code to a free cell, and you'll break it down after:

There's a lot going on here, so look at each line individually:

Ok, with the model converted, it's time to use it in a Swift app.

You've converted your model, and you're ready to use that model in your Swift application. In this section, you'll create a Mac OS Command Line Tool, but know that CoreML models can be used on all Apple devices that support CoreML. You'll print everything to the console.

Create a macOS Command Line Tool in Xcode, and drag the CoreML model you created previously into the project.

Note: Be sure to "Copy items if needed" is selected as the destination when adding the file to the project. 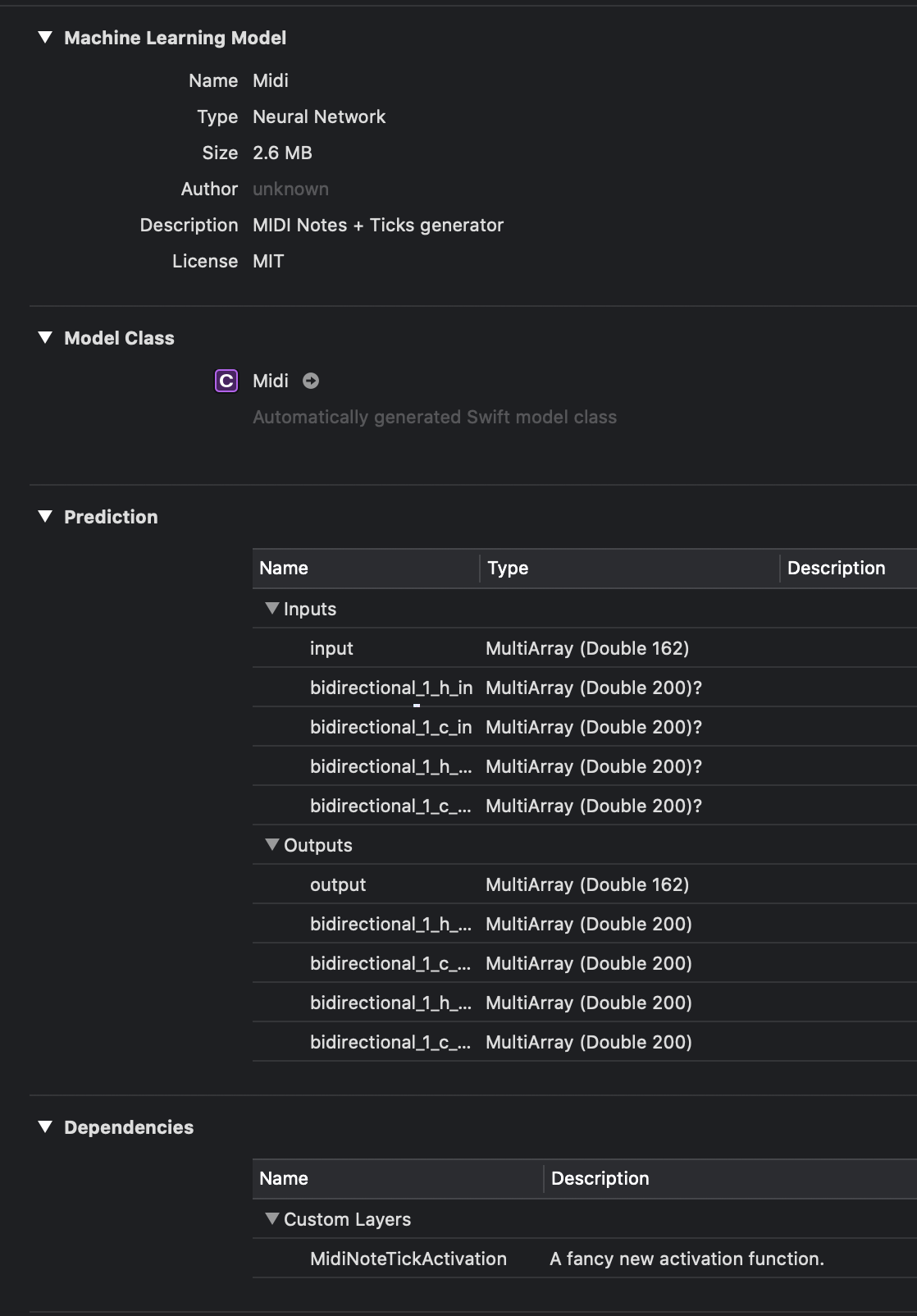 Now, is there a better implement this method? Perhaps. There's probably a way to run a softmax on the MLMultiArray by getting access to the underlying pointers directly. Moreover, MLCustomLayer also provides a version of the evaluate that you can run using Metal shaders directly. This tutorial won't implement that interface.

With the Custom Layer complete, it's time to focus your attention to running a prediction in Swift. Start by pasting the following code in your main.swift file.

These constants define the parameters of your data. If you recall, your dataset has 15 unique notes, and 142 unique ticks. Next, you have to create the input array, which is of type MLMultiArray. You'll also create some helper functions. Paste the following code to the same file.

Next you'll run a prediction first randomly selecting a note and tick value, copy the following code in your file:

Here, you're using the size of the note and tick dataset to generate a random value and assign it to the input MLMultiArray.

Finally, in order to run a prediction, instantiate a Midi object, and pass the MidiInput into the model:

The result is an object of type MidiOutput. It should contain an output MLMultiArray named output, a name you defined when converting the model from Keras. You can use the argmax function defined earlier to find the index of the note and tick of the next note.

If all went well, you should have an output that shows the next note and tick. You can turn around, and feed this value back into your model to get the next consecutive note and tick. Do this a number of times, and you'll have an entire MIDI track with some nice rhythm!

Congratulations, you've gone from creating an LSTM model in Keras model to using that model in a Swift project.

In this tutorial, you managed to create a model that will generate a bunch of MIDI notes built from a drum dataset. You managed to analyze the MIDI files, convert it to a dataset that you passed into a Keras model which you trained and then converted in to a CoreML model.

There are two key points in this tutorial:

If you enjoyed this tutorial on working with CoreML LSTMs, consider checking out mlfairy.com. MLFairy is a service that helps you create better CoreML model for all your Apple edge devices.